2,1
Might seem much worse than 1,2 by the block frames but has some subtle advantages: 2,1,3+4 can get you straight into a FC mixup to make better use of the plus frames on hit; and the second hit tracks well, is slower than most jab strings, and has 3 active frames, which altogether makes duck or step punishing it super hard.
2,2
Counter hit confirm into 2,2,3. More useful at the wall.
3
Hit confirm into 3,3 for Lee's best mid mixup option. Can also just throw the 3,3 out there to interrupt challenges on block.
4
More damage on counter hit than 4,4 and harder to whiff punish, but worse tracking, frames, and pushback. Less able to convert into a combo at tip range than 4,4 or 4,3.
4,3
Counter hit confirm into 4,3,4. More damage on normal and counter hit than 4 or 4,4 and makes things a bit harder for the defender.
f+3,3,3,3
Hit confirm into f+3,3,3,3,3,4. Safer than it seems if you mix it up on block, because a counter hit (f+3,3,...),4 does a lot of damage.
d+4
Counter hit confirm into d+4,4,3. Doing d+4,4 every time gives an easier confirm and it's still pretty safe given all the extensions.
b+1:1
Hit confirm into b+1:1,2 and do b+1:1,3+4 or b+1:1,f~n otherwise. Strong if you get creative with it. More useful at the wall.
b+4,3
Borderline homing only if the 3 is timed right, about halfway into the startup. Practice this timing. It's important.
wr3,4
Strong move but also a good way to die if you rely on it too much. Complement with 1+2 and b+1:1 to deal with sidestepping. After wr3,4,3 is blocked, HMS.1+2 is unsteppable and uninterruptible by most characters.
ws2
More effective than it seems, especially if your opponent is trying to fuzzy guard ws2,3 and ws2,4. They're thinking so much about the extensions that you almost get a free turn on block.
ws3,3
Do not doubt this move. It's safer than it seems. You can borderline use it as a poke. In theory infinite kicks aren't that good, but in practice nobody punishes them properly. Just make sure you aren't predictable. Don't do 4 kicks every time. 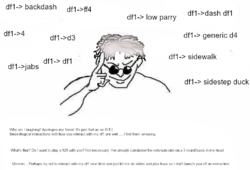 Lee's basic gameplan revolves around his df+1, which is -1 on block.

Most opponents have the following as their fastest options:

With you at -1 they have the "advantage", but every fast option can get launched. Even more, both of Lee's options are safe and track well.

Instead they might choose an evasive option, but these mostly lose to another df+1.

Together these 3 moves represent a strong threat that must be answered directly and create Lee's most basic gameplan:

Because Lee has so many good CH tools, being at a slight frame disadvantage isn't as bad for him as it is for other characters. This is why Lee can get away with spamming df+1, even though it's -1.

Attacking when you're at frame disadvantage is called stealing a turn, and Lee excels at it. Beyond the moves from his basic gameplan, Lee has many more for stealing turns:

That last one might seem strange. How are you stealing a turn with db+4 if it's -2 on hit? Isn't it still their turn, even though you "stole it"? Again we have to look at what the opponent's fastest options actually are:

Even more devious, f,F+4 at -2 is the perfect timing to maximize its evasive potential. In this situation it goes under fast mids such as Kazuya's df+2 and many df+1's. Suddenly it doesn't seem so much like it's their turn just because they're +2.

At some point opponents start respecting Lee's ability to steal turns and just... stop attacking. This poses a bit of a challenge, because Lee's basic gameplan doesn't do much against someone who doesn't attack.

The obvious solution is to keep hitting them. If an opponent isn't attacking at all, you can just chip away with 3,3 and a few lows. They'll die eventually.

Unfortunately, when people ask "How do I deal with turtles?" that's not quite what they mean. They could mean any number of things. All they're really saying is, "My opponent isn't falling for my simple CH flowcharts!" so it's hard to give generic advice that's useful.

No opponent stops attacking completely. If you ever decide, "I'm playing against a turtle, so I better stop using my CH moves!" then you've lost the game. They don't need to be scared anymore. "Oh, you're just going to do some lame mixups with Lee? Welcome to EWGF town."

Nonetheless, there does come a time where you need to put the pressure on, and that's what slide is for.

Lee's slide is his most aggressive tool for opening an opponent up. It's quite different from typical chunky lows for the simple reason that it's done from full crouch.

A common mistake is to think that with a fast enough input, the slide becomes "unseeable". This is nonsense. From standing, the fastest slide you can do is i29. Having a fast, precise slide input is important, but not because it makes it unseeable from standing. The mixup is from crouch, not from standing.

It might seem silly to note, but because the mixup is from crouch we should think about what being in crouch actually does:

This has a big effect on the value of the opponent's moves. Where usually highs are great at keeping people in check, now they don't work at all; and mids usually get blocked, but now their risk to reward is fantastic.

Being in crouch does one more thing:

For Lee, however, there's an even greater bonus: he gets access to an i10 mid with ws3,3 and an i16 crouching CH low with FC.df+4. Both have great tracking.

With all this in mind, we can finally get to the slide itself.

When you enter crouch, your opponent's options are effectively reduced to mids and blocking. Fast highs are out of the question. Movement is not very effective because your options track both sides.

In this situation, it's typical for an opponent to have a default reaction. When they see the crouch, they do something. Probing for and noting this reaction is important before thinking about a mixup. The correct play for them is mix up their response, but people generally have one automatic reaction that they have to consciously override.

The easiest way to test this is with ws4. It's safe and fast, so you don't risk much by testing with it.

Once you've figured out their tendency, exploiting it is simple. Do ws2,3 vs crouchers. Do ws3,3 vs attackers. Do slide if they don't react.

At some point it becomes a raw guessing game. For this, you need a good mid option to complement the slide. There are 3 key choices:

The ws2,3 and ws2,4 mixup can be fuzzy guarded. If your opponent shows they can do this, just stick to ws2,3.

Generally speaking, you want to do uf+4 if range permits. Thinking of ws2 as lower risk is a losing game—the slide mixup is inherently risky, so you may as well go for the big payoff.

But he also has moves that are very effective at a distance, most notably b+4 and df+2.

In addition, has has moves to create space between him and his opponent, most notably df+4. And he has tools to close space, most notably wr3,4 and 1+2,3+4.

Consider 4,4 on hit. The opponent is -6 and left at a distance. If either player tries a jab, df+1, or df+2, they'll whiff to a backdash, so those options don't look great. But Lee has b+4, which will CH launch any attempt at counter-attacking and is mostly safe on whiff. With that enforced to some degree, it's possible for Lee to move straight into a crouch mixup. In this way b+4 effectively acts as an approach tool, because the threat of it lets you creep in.

Similarly, consider 4,4 on block. The opponent is +5 and left at a distance. Fast moves still whiff. To use their frame advantage, they'll have to run in and attack. You'll mostly be interested in blocking, but it's possible to steal the turn with df+2, f,F+4, or b+4 as well. Because they have to run in to attack, they'll lose despite the frame advantage. This can make them interested in attacking without running in, where hopefully you can make them whiff with a backdash (and punish with f+3,3,3,3,3,4).

It's difficult for Lee keep in his opponent's face. An opponent committed to backdashing away will be clear from his pokes after only 2-3 attacks, so his pressure can feel a little a goofy. Instead, his pressure is all about controlling space. His pokes are great up close, and his keepout is great at range. You just need to use the right tool for the job.

HMS gives you access to the stance's moves. If you want to do any of those moves, then HMS transitions enable that.

The key HMS moves are:

The "poking" options HMS.1 and HMS.1+2 lose the turn completely and are slower than Lee's normal pokes, so transitioning to HMS to use these pokes is mostly suspect. The main reason to use them is if the transition has better frames than no transition.

HMS transitions sometimes give better frames than the non-transition version.

HMS transitions are a way to control space.

The point of these transitions is the difference in space created by them compared to not doing the transition. By having the transition as an option, the opponent can't be sure if their counter-attack is going to whiff or not.

HMS helps you get into crouch. When HMS is cancelled with DB or DF, it recovers crouching. This is useful if you're interested in doing slide mixups.

All HMS transitions are useful for this, but a transition with another purpose is preferable.

After f+4,3 at the wall, you can replace d+3 with ub+3 for 3 more damage. This beats every option except for quickstand.

If the ub+3 hits standing (possible if they getup into crouching guard for some reason), d+4,4,3,3 and d+4,4,u+3 are guaranteed. It's possible with some practice to react to the different knockdowns and act accordingly.

This is useful if the opponent doesn't know what's going on, since you just get free damage and better oki on your wall combo.

But if they know how to block it, the mixup is quite bad. Quickstand vs ub+3 leaves Lee at -13, and staying down vs f,F+3 causes a big enough whiff to punish with a spring kick or wake-up mid. So it's much worse on average than the guaranteed damage from d+3.

Fahkumram, Gigas, Jack-7, Kuma, and Marduk recover faster after f+4,3 than other characters because it hits on an earlier active frame, so—

Against bigger bodies, f,F+3 can beat a side roll. For these opponents, when choosing to stay down their best option is to do nothing. This makes f+3+4 an enticing option, since it does 6 more damage than ub+3 but loses to side rolls. However, because of the difference in speed between f,F+3 and f+3+4 this can be fuzzy guarded in theory with a delayed quickstand.

There's no hard rule on whether f,F+3 will beat a side roll and in which direction, since it depends on the angle, but as a general rule:

If the opponent's back is against the wall, slide won't switch sides. Instead, Lee recovers in FUFT and the opponent in FUFA, with their back still to the wall. Lee can recover with quickstand and do standing moves well before the opponent recovers.