This page is intended to document character-specific strategies and tech that Katarina can adopt. For general match-up tips, visit the Counterplay section on that character's page.

Kat follow-up after b+2,2 slap back

Analysis of b+3+4 against CJM

b+3+4 is a good tool against Anna's f,F+3,4~b+3 into CJM stance transition. It beats most options from the stance, and the options it loses to can be SWL. Since f,F+3,4~b+3 jails, you can input 2,2 to punish f,F+3 if Anna stops there. If she continues, the input will be eaten up and you can do b+3+4 on reaction to the string continuing.

CJM.df+2,1
she can full combo off of it whether she cancels it or just does qcf+2. It's easy for the Anna to confirm the CH and cancel the string (on the assumption that they already inputted both of the hits). She just needs to press b after confirming the CH. They can still go for a full combo from here.

Your main strategy against Eddy is poking with df+1. He has a really hard time dealing with that move; he can't step it, and it tracks his auto sidestep punch that Eddy uses instead of step. It'll also float handstand very consistently, and can float RLX, but is not consistent.

Probably the two most important things in this match-up are not giving him breathing room and knowing your punishes. 4,4,4, 1,1, and f,F+2,4 have limited utility in this match because of how often Eddy high crushes, but df+1 is much faster than most of what Eddy wants to throw at you. Once you teach him to respect it, you can play a more normal game against him, but you've got to keep it on the table to keep him honest.

You can also backdash out of RLX mixups on hit.

SS.4 is a weird one to lab because he can get it either direction and he can either cancel the SS with it, or do it after the SS In general, all your fast lows beat it, mids beat it but are subject to regular tracking (b+1, df+2, b+3+4 seem to track no matter what).

Pros/Cons of playing Kat vs. Ganryu 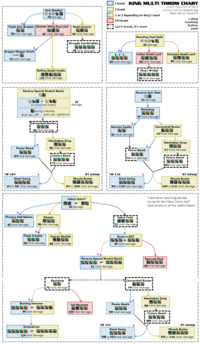 This section could do with more detail.