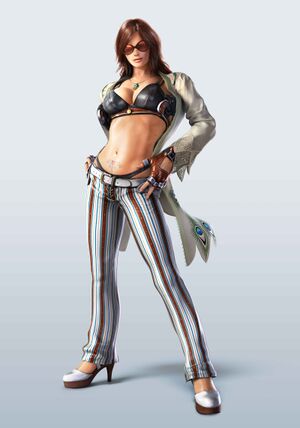 Katarina (Kat) is a bare-bones poke-heavy, counterhit-baiting character. She is great for beginners due to her low execution requirements for key moves and staple combos, as well as her simplistic gameplan. Her main focus is to annoy the opponent into attacking when they shouldn't, leading to some huge damage payoffs for Kat if you should succeed. A large amount of her movelist either pushes back her opponent to a desirable range or leaves her in a frame-ambiguous situation, allowing her to freely move or mash after an attack is blocked/connects.

Katarina uses fundamental tools like d/f+1, jab strings, d+3 and d+4 to chip away at her opponents. She can use her 11f magic 4 and 15f d/f+4 to get counterhits, which lead to big damage. She has above-average movement which works in her favour to create whiffs via backdashes or sidesteps, which she can punish using one of the best hopkicks in the game (u/f+4,4) or her 12f punisher in 2,2. Her ideal playstyle relies a lot on good fundamentals and reading of player tendencies for success.

Katarina struggles to open opponents up due to a lack of strong lows. She has either very high-risk/high-reward lows which are seeable, or low damage pokes which don't give her momentum to continue pressure. She has a decent FC mixup to break turtles.