This is the only page that doesn't use Notation
Player 1 holds left, and Player 2 holds right. Both hold backward.
If left and right or up and down are input together, they'll cancel each out other. This is often called simultaneous opposite cardinal directional (SOCD) cleaning.

Left and right are almost never referred to directly. Instead, forward and backward are used, since for the player on the left side (Player 1), right is forward, and vice versa for the other player. 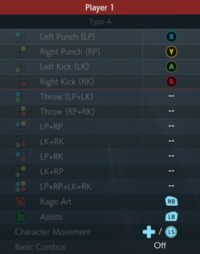 A bind is a button that's assigned to something other than a single attack input.

The most typical bind is for a combination of attack inputs. Without this if you intended to, say, press both punch buttons together, but accidentally press left punch one frame earlier than right punch, you get a move as if you had only pressed left punch.

Tekken 7 supports binds for any combination of two attack inputs, and for all four at once. You can't bind a combination of three attack inputs. Such combinations are only used for taunts, which don't do anything (with the very notable exception of Bryan's taunt); and in chain throws, which can make use of button buffering.

You can bind a button to Rage Art. For some stances, this button won't work even when the Rage Art can usually be done from that stance. For other stances, it will work despite the Rage Art not being possible to do otherwise.

You can bind a button to «Assists». If you do, holding it and pressing one of the attack buttons will perform a specific move.

If «Basic Combos» is turned on, then mashing either punch button will do a basic combo. The combos are terrible and it stops you from doing any other moves using punch buttons. Not recommended.

In-game binds were first introduced in Tekken 3 and have been tournament legal since around 2005. 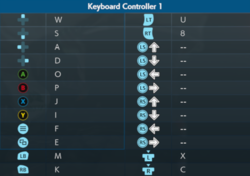 Keyboards map their input to a pad.

Input devices fall into 3 general categories: keyboard (or hitbox), pad (e.g., DualShock 4), and stick. For all of these, the attack inputs are handled by push buttons. The difference is how they handle directional inputs.

Keyboards are not recognized on the PS4 version of Tekken 7.