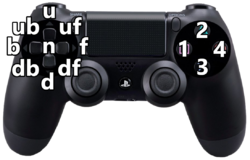 Notation applied to the default mapping for DualShock 4 on P1. On P2, the d-pad inputs are flipped.

For terms of art relating to Tekken, see Jargon

Notation is used throughout both this wiki and the wider Tekken community as shorthand for game input, combos, move properties, and more. This page acts as both a style guide for Wavu Wiki contributors and as a reference to help readers figure out what this notation means. Most things listed here are used elsewhere, but it's not a guarantee that any off-wiki resource is written to this convention.

Spaces should not be used within a single move or string's notation. In particular, do not put spaces after commas or dots. This is so that readers can better gauge the flow of a combo at a glance by the spaces.

Without this convention, it'd be necessary to have some “next move in sequence” symbol for readability, which would be super noisy.

Stances in this context are anything that gives access to new moves. While things like Rage, Meter, Starburst, or a successful parry might not be considered stances, they are notated as if they were. Strings that loop (e.g. Ganryu's d+2,2,2...) can also be notated in this way.

Stances don't have to be abbreviated. If they aren't, the stance is written out in brackets, e.g. one can write “b+1+2,(Successful parry).4” to be more explicit than “b+1+2,P.4”. This is preferred for uncommon stances that most readers won't know any abbreviation for.

A letter indicates how the defender recovers.

Multiple numbers indicate that there are differing states of the defender's recovery.

A number in brackets indicates when the opponent can do a tech recovery. This is not strictly speaking the frame advantage, since it doesn't count how long the tech recovery itself takes. This number should not have a letter modifier.

If there is no number in brackets, then the opponent can't do a tech recovery.

Any number with an “i” in front of it indicates the frames where an attack can hit, also known as the active frames or startup.

If a move has multiple active frames, the first and last active frame are separated by "~". For example, "i23~25" means the move hits from frame 23 to frame 25.

If a move is part of a string, the first frame is not the start of the string, but the start of the move. In this case, the number starts with a "," to try and clarify this. For example, Lee's 1,2 is ",i12", meaning the active frames of the 2 are 12 frames after the active frames of the 1. This is useful for knowing how much time there is to interrupt the string when the previous move whiffed.

If a move has a motion input, the time to do that input is not taken into account, so these moves are slower in practice. For example, Heihachi's EWGF is i11 but needs at least 3 extra frames to input, so the fastest it can be done with perfect input is 14 frames.

Any number written with an "r" in front of it indicates the recovery frames for a move, also known as the whiff frames. This is the time after the active frames where the attacker can't guard.

If followed by a stance abbreviation, this indicates that the move recovers in that stance. For example, "r24 ZEN" means 24 frames of recovery and a transition to Zenshin.

For projectiles, the recovery is from when the projectile is launched, so the active frames and recovery overlap.

There's a lot of notation out in the wild. The following should be avoided in Wavu Wiki articles, but are noted for being used elsewhere.

Two other input notation styles are Iron Fist (also known as official or in-game notation) and numpad (also known as anime notation). Numpad style is so-named because the directional inputs are based on their position on a numpad.

Iron Fist is used sparingly on Wavu Wiki, mainly where there isn't enough space for normal letters and numbers to fit.

Numpad style is more common in South Korea and Japan and in a lot of fighting games other than Tekken. LP+RP and LK+RK are often shortened to WP and WK respectively, or sometimes PP and KK.

One reason English Tekken communities use this unusual (when compared to other fighting games) notation is that there aren't many moves with motion inputs, much less any more complicated than quarter circles, so there isn't a huge advantage in adopting numpad notation. On the other hand, the majority of Tekken moves are just strings of attack button inputs—sometimes starting with a single directional input—so using numbers for the attack buttons makes it more succinct than using LP, RP, LK, and RK.

(Of course, Tekken also uses a lot of combined attack button inputs and they still end up rather verbose with this notation, e.g. 1+2+3+4 to do a ki charge. This could be addressed by instead assigning LK to 4 and RK to 8 so that combined attack inputs could be written unambiguously as the sum itself. Then e.g. 1+2 would be 3, and the ki-charge input, i.e. 1+2+4+8, would just be 15. (Don't expect anyone to understand you if you do this.))