A wave dash (diminutive wavu wavu) is a technique performed by chaining together crouch dashes and dashes. It can only be done by Kazuya, Heihachi, Devil Jin, Jin, Bob, Hwoarang, Armor King, and King[1]. Its purpose is to make an approach with quick access to crouch dash, dash, and while standing moves while also having some frames of high crush.

How do I do a wave dash?

To perform this technique, first make sure you have a consistent crouch dash motion (f,n,d,d/f) as this will be the basis of the wave dash. To do the actual wave dash do the crouch dash but end with a f after the d/f (a helpful tip is to think of it as doing f,n,qcf), then simply rinse and repeat, making sure to return to neutral in between. So your command history should look like f,n,qcf,n,f,n,qcf,n,f,n,qcf... so on and so forth (see photo for command history). Sounds simple enough, but getting a consistent, fast wave dash is something that takes substantial practice for most players, and don't forget you should be able to do it on both player 1 and player 2 sides. 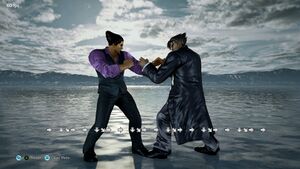 How is this even possible?

The reason wave dashing works is because hitting forward during the crouch dash cancels into a regular dash (you're buffering the first forward from doing the qcf so you only have to press it one more time). Then you've already hit forward so now you just have to do qcf to get the next crouch dash.

With the stick due to how most (square-gated) sticks operate, releasing the d/f to n creates a f input as it travels through the f connector to reach n. This makes it so you can move stick from d/f to n to f to d,d/f for the crouch dash loops.

Is it just for styling on people?

Although it is indeed great for styling on people, wave dashing has different practical uses depending on the character. There are also some universal properties of wave dashing that are good to know, such as it high crushes on certain frames, it will realign with sidestepping opponents, giving normally linear moves some pseudo tracking, and how fast you wave dash will determine how much ground each individual crouch dash covers. You can cover almost the entire screen space in about 3 wave dashes if they are done slowly. Wave dashing allows for a unique and effective way of closing distance and gives easy access to f,f moves since you are constantly buffering a dash.

Like mentioned before, how and when you wave dash will often depend on what specific character you are using. For some examples, Mishimas and Jin will often use it together with electrics and other key moves to control space in neutral and will use wave dashing after a knockdown to setup a 50/50 mix up. King and Armor King get access to their threatening chain throw mix ups from crouch dash and wave dash, and will use that to their advantage to make people panic and duck. Research and experiment to see what uses of wave dash are best for your character.

Unfortunately, most players won't immediately respect you just waving in their face over and over since you cant block plus wave dashing actually pushes the opponent's back to the wall, they need to be conditioned to sit still. One of the best ways to do this and overall one of the most important techniques involving wave dash is wave guard. You can cancel your crouch dash/wave dash into a block by quickly pressing back after the crouch dash input. This will allow you to block and punish common panic moves like hopkicks and even if they do a safe move as keepout for a example a d/f2 you still get free frame advantage. The players you need to be careful doing this on are those that will try pressuring you every chance possible as you are basically letting them run their offense for free, so don't forget to throw out a keepout move of your own every once in a while. Once they respect you and aren't pressing as many buttons, you can start mixing them up however you want.